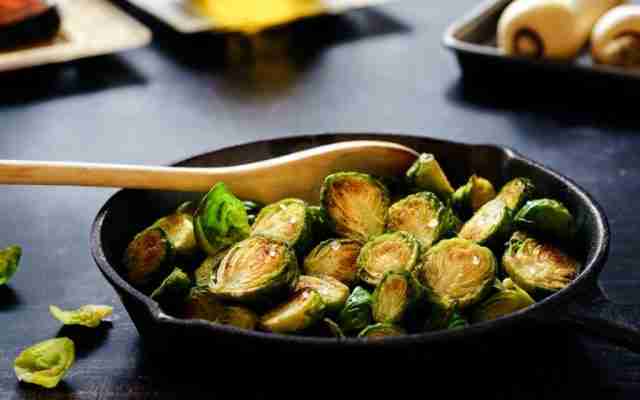 Brussels sprouts are native to the Mediterranean area and first appeared in northern Europe during the 5th century. They were heavily cultivated in the 13th century near Brussels in Belgium which is how they got their name.

Sprouts are as traditional as Father Christmas and whether you love them or hate them they’re one of the healthiest vegetables around.

No one knows for sure why Brussels sprouts are such an important part of the traditional British Christmas dinner, but the most likely explanation could simply be an accident of timing.

Sprouts came to the UK towards the end of the 18th century, just as the idea of Christmas Dinners was gaining popularity.

As an added bonus all of the Brussels sprouts grown in the UK are eaten here, and the best time to grow them in the UK is over the winter period, from October to February. That’s Perfect timing for Christmas dinners.

Although traditionally a winter food, sales of imported sprouts have grown strongly since 2015, and now they sell like crazy all year round.

There are three reasons sprouts are so popular

2)  They taste better than they used to

3)  Brussels Sprouts are a “Superfood”

Talk to people in the Brussels sprouts business and they all tend to say the same thing:

A few years ago, sometime around 2105, a couple of celebrity chefs said, ‘hey, you’ve got to taste these Brussels sprouts with added bacon, they’re great.

People went wild for them.

Brussels sprouts started to feature more and more on fashionable restaurant menus, and when people discovered how much they liked them, they told their friends and started buying them to cook at home.

Sprouts taste better than they used to

Anyone who grew up before 1995 will remember Brussels sprouts as a bitter, unpleasant veggie with a less-than-appetizing smell (think boiled cabbage).

Weirdly a few people have always loved sprouts because their genetic makeup affects the taste receptors that detect the bitter compounds so that they don’t notice them.

In the early 1990s, working to help the rest of us enjoy our Brussels, Dutch plant breeders realized that traditional sprouts had high levels of chemical compounds called glucosinolates.

It’s these compounds that give sprouts—and other cruciferous vegetables like broccoli, kale, and cabbage their bitter taste. It’s an important part of the plant’s defence mechanism against leaf-eating pests.

These were then cross-pollinated with newer varieties that had higher yields and better natural disease resistance without relying on glucosinolates.

The Dutch plant breeders were also able to use conventional breeding and selection methods to reduce the bitter flavours while maintaining the health benefits of Glucosinolates, particularly their antioxidant and anti-cancer properties.

These days, no matter which genes you have you’ll find your sprouts have a sweet, mellow, nutty flavour.

Brussels Sprouts are a “Superfood”

Brussels sprouts are a member of the same family as kale, broccoli and cauliflower, and have the same health benefits

Here are just a few ways Brussels sprouts may benefit your health.

Sprouts are high in Nutrients

Here are some of the major nutrients in 100 grams of cooked Brussels sprouts:

Sprouts are rich in antioxidants

Sprouts are high in vitamin K

Brussels sprouts are high in vitamin K, a nutrient important for blood clotting and bone metabolism.

The fibre and antioxidants in Brussels sprouts may help keep your blood sugar levels stable.

Brussels sprouts are high in antioxidants and other compounds that may help lower levels of inflammation.

Sprouts are high in vitamin C

Brussels sprouts are high in vitamin C, an antioxidant that’s important for immune health, iron absorption, collagen production, and the growth and repair of tissues.

How to Buy Brussels Sprouts

Smaller is better when it comes to tenderness and flavor. Look for Brussels sprouts that:

How to Cook Brussels sprouts

Traditionally Brussels were boiled to death but that’s all changed now, here are some great ways to cook and enjoy your sprouts (and don’t forget to add some fried bacon pieces).

Cut them in half from the top to the stem, and make a short cut in the hard stem (this lets the heat penetrate the hard stem and ensures the sprouts cook evenly).

Heat olive oil in a saucepan over medium-high heat.

Place the Brussels sprouts in the pan sliced-side down and season them with salt and pepper to taste.

Sauté them one side for about 5 minutes until they’re golden brown, and then turn them over to the other side.

Pour enough water into the pan so it covers the bottom of the pan. Cook the Brussels sprouts until the liquid has evaporated and they’re cooked through.

Toss them with lemon juice and serve.

Cut off the stems to help them cook.

Season the Brussels sprouts in a bowl. Drizzle them with black pepper, olive oil, and salt.

Toss the Brussels sprouts to coat them evenly and place them in a single layer in a baking pan.

Roast the Brussels sprouts for 35-40 minutes or until they’re tender. After 30 minutes, start checking to see if they’re tender by piercing them with a fork.

Add seasoning to taste and Serve.

Place a large pot of water on the stove, add a pinch of salt, and bring it to a boil.

Cut them in half from the top to the stem, and make a short cut in the hard stem (this lets the heat penetrate the hard stem and ensures the sprouts cook evenly.

Boil the Brussels sprouts for 5-10 minutes. They should just begin to go soft. Then, drain them.

Wait 1-2 minutes for the ingredients to heat up and for the garlic to soften.

Bring a pot of water to a boil. Place a large pot of water on the stove, add a pinch of salt, and bring it to the boil.

Place the Brussels sprouts in the boiling water and cook them for 10-15 minutes until they’re tender, stick a fork in them to check when they’re ready.

Once they’re tender, drain and season the Brussels sprouts with salt, pepper, and butter.

You can also steam Brussels sprouts using a vegetable or rice steamer.

For the ultimate health kick, this is a great way to eat your sprouts raw courtesy of BBC Food

Put the sprouts into a bowl with the onion, carrots, cashews, and cumin seeds and mix well.

Put the yoghurt, mayonnaise, mustard, lemon juice, and zest into a second, smaller bowl and stir until fully combined.

Tip the mayonnaise mixture into the chopped vegetables, and stir well, making sure the creamy dressing covers all the veg. If you like your slaw extra creamy, just add extra mayonnaise and yoghurt.

Stir through the chopped chives and parsley and serve.

If anyone says they don’t like sprouts, do them a favour and share this article with them. They’ll thank you for it.